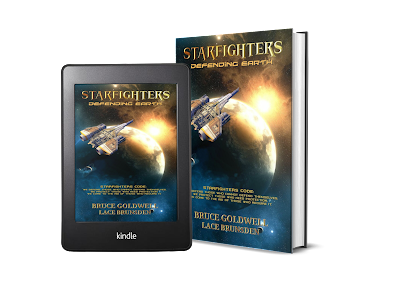 About the Author - The journey of Bruce Goldwell did not start so happily compared with other writers; he was homeless for over a decade. During that time, he used to visit bookstores to read self-development books written by famous authors like Bob Proctor, Brian Tracy, and many others. After reading these books, he wished he had learned these success principles when he was young.

Goldwell envisioned writing a books where readers of all ages could learn important life lessons through fantasy, mystery, and magic.

Having just released Book V of his Dragon Keepers fantasy book series, he is now about to release this first book of his scifi book series for teens.

In the new book series, Goldwell focuses on an alien invasion of earth and how earth's defenses will be handled by a group of teens who are recruited to defend the planet against the threat from outer space. The series promises to be packed with adventure and thrills with plenty of twists and turns along the way that you won't want to miss out on.

Book 1 Synopsis - Billy Bronson is obsessed with Starfighter, the Virtual Reality game that makes you feel like you are piloting your Starfighter, as is every teenager in the civilized world. When he completes a time-sensitive mission in second place, he is surprised to see that he is invited to Nevada to compete to be ranked one of the best Starfighters in the entire world.

But, when Billy gets there, all is not what it seems, Billy realizes that the alien known simply as Harvey has taken it upon himself to train up his group of Starfighters on Earth, without the permission or the consent of the Galactian Federation. Harvey cannot let innocent people die. The way he has managed to do this covertly is by implementing Starfighter training into the hit game.

Billy Bronson, amongst others, are some of the best Starfighters that Earth has to offer, but this is not what they signed up for. Will Billy and his new friends be able to defend the Earth from an attack by the Thrall, or will the teens fail in their first mission?

Only time will tell. One thing is certain though, it will be one action-packed adventure.

Backstory: The Galactian Federation established many centuries ago, has maintained peace throughout the known universe. They do so by implementing a set of laws, followed by all those who join the Federation. The foremost of these laws is not to interfere with any planets that have not yet developed the technology to be capable of intergalactic travel.

For the most part, law and order prevail under the rule of those who are elected to sit upon the Federation’s Council, however, some prefer not to join the Federation, and who lead their way through the universe.

One of these groups is a species known as the Thrall. They are a violent, greedy species who only wish to consume and better themselves. Even the Thrall cannot trust their own. This species moves from world to world, using up all the resources for their gain, before leaving nothing but a shell behind. There is only one force that can stand up to them, the Galactian Federation, and specifically their Starfighters.

The Starfighters are a group of elite spacecraft pilots, named after the agile ships that they command. They assist the Federation in maintaining their precious peace, but there are some limitations to their power.

Because they are strictly under the control of the Galactian Federation, they must abide by all the laws created by the order. Under no circumstances can they break any of these laws, especially not the greatest of them all. Even if a planet is in imminent danger, it cannot interfere and allow that planet to discover the existence of extraterrestrial life before it is ready. This rule was put in place to protect species on planets that did not have technology advanced enough to defend themselves from the other creatures that traversed the universe, but now it will lead to the death of a planet. The Thrall have set their eyes on Earth, with its vast pool of resources, and there is nothing that anyone in the Federation can do about it.

One member of the Council of the Galactian Federation does not let that stop him.