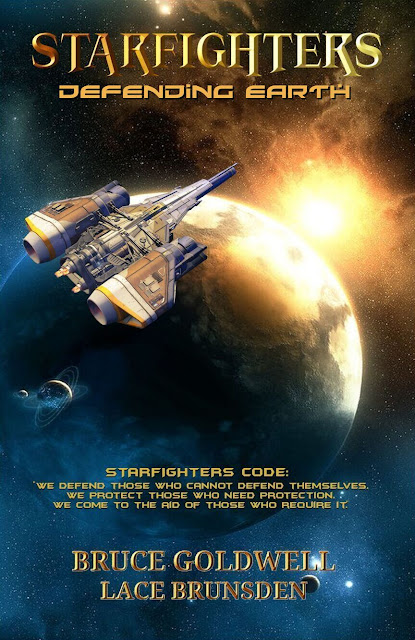 USA - Starfighters is a series of sci-fi fantasy books that have been written for everyone to enjoy. The first book of the series is called “Starfighters: Defending Earth”. In this amazing, adventurous sci-fi book, the authors, Bruce Goldwell and Lace Brunsden capture the epic story of intense intergalactic missions. The book vividly portrays alien life and other non-human races, residing in different galaxies. Goldwell and Brunsden skillfully wrote each scene and dialogue to keep the readers hooked. Being one of the sc-fi books, Starfighters: Defending Earth relies heavily on imagination. The authors have masterfully left the required room to meet the imagination where required, doing so, enables the book to mold according to everyone’s unique way of thinking.

Starfighters: Defending Earth is a refreshing take on one of the most popular genres in novels, the sci-fi fantasy. With Goldwell and Brunsden’s fine storytelling techniques and enthralling environment setting, this book is bound to take the readers on a trip to the stars and beyond. The Starfighters series books are not just some other sci-fi books for teens, this series of books has been written to provide the readers with something different. The book depicts live and relatable characters with compelling dialogues. Each character has their background story, and that’s what makes the characters an interesting topic within Starfighters: Defending Earth.

The latest book by Bruce Goldwell and Lace Brunsden will add to the epic collection of sci-fi books for kids. Everyone including kids, teenagers, and adults can enjoy this story of galaxies. In the new book series, Starfighters, the authors, Bruce and Lace focus on an alien invasion of earth and how earth's defenses would be handled by a group of teens who are recruited to defend the planet against the threat from the outer space. The series promises to be packed with adventure and thrills with plenty of twists and turns along the way.

The Synopsis of the book Starfighters: Defending Earth reads: “Billy Bronson is obsessed with Starfighter, the Virtual Reality game that makes you feel like you are piloting your Starfighter, as is every teenager in the civilized world. When he completes a time-sensitive mission in second place, he is surprised to see that he is invited to Nevada to compete to be ranked one of the best Starfighters in the entire world. But, when Billy gets there, all is not what it seems, Billy realizes that the alien known simply as Harvey has taken it upon himself to train up his group of Starfighters on Earth, without the permission or the consent of the Galactic Federation.”

The eBook is available now on Amazon and the Paperback and Hardcopy will be released the first week of June.

Bruce Goldwell recently released the latest novel in his fantasy book series, Dragon Keepers. Goldwell is a writer of many talents. His interest in a mix of fantasy, mysticism, wizardry, and sci-fi has enabled him to write a diverse array of titles. Goldwell has been honing his writing and storytelling skills with multiple action-packed novel series. He always tries to bring some twists to the mainstream stories by incorporating something new and fresh, while ensuring all his readers will enjoy his stories.

Lace Brunsden is a writer and editor known best for The Sorcerer's Stone and Magicians vs Machines series. She writes predominantly fantasy and sci-fi but dabbles in a variety of other topics in order to diversify her experience and frame of reference. Brunsden has been writing for several years and enjoys writing stories with elements that can be enjoyed by people of all ages, not just children.

Bruce Goldwell is an American author and founder of Bruce Goldwell Books. Bruce is known for his famous fantasy adventure novel lineups, Dragon Keepers and Starfighter. The author has received positive feedback regarding his work. He remains an inspiration for young, aspiring authors. The journey of Bruce Goldwell did not start so happily compared with other writers; he was homeless for over a decade. During that time, he used to visit bookstores to read self-development books written by famous authors like Bob Proctor, Brian Tracy, and many others.